I’m Not Associated With Any Store!

A significant amount of email I’ve received over the years has to do with people trying to locate the chain of science fiction, fantasy and comic book retail stores named Forbidden Planet. Since I had a site several years before they did, people have been and for some reason continue to be confused as to which site is the retail one. My site has nothing to do with them!

The Forbidden Planet stores seem to be located in several countries though predominately in the UK. As such, I get all sorts of requests for catalogs and product availability. Why would I get so much email? Well, as much as they carry SF related items, most of them seem to be disappointingly low tech and lack websites.

The Search for a Store

When I was in New York City in summer of 2000, I made an effort to locate the Manhattan based outlet just to make sure it really did exist. After a quick look in the local Yelllow Pages, I was off to discover the shop. A short subway trip later and there I was, finally seeing a real store called Forbidden Planet!

In the intervening time since my visit, a site has been created (see below). To help in your search for the store, I had a picture taken of me in front of the store and I snagged one of their business cards.

Here’re some sites where you can find more information about a FP store in your neighborhood. 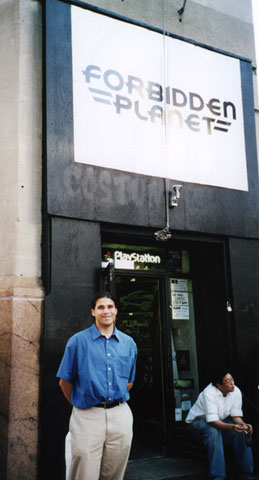